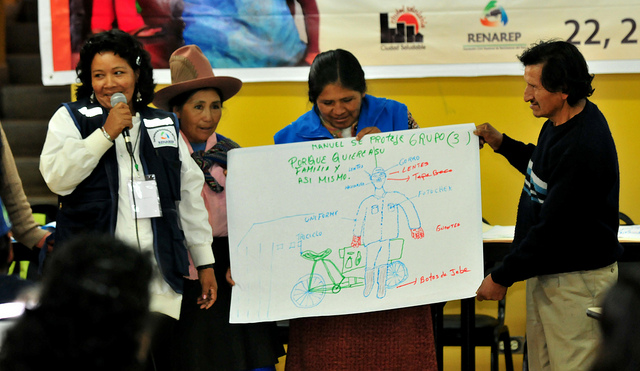 I met Sonia Quispe and her mother, Doña Dominga Taco, in 1998.  It was 2:00 am and they were opening garbage bags in downtown Lima, to recover organic waste for their pigs.  That year we were able to create the first association of waste pickers in Peru, and although we still did not have a Law on Waste, we thought this sector was very important in waste management, and women such as Sonia and Dominga were even more important.  Since the beginning, I knew that they were entrepreneurs, that they were generating self-employment, and even though they were not conscious about it they were taking care of the environment, avoiding that this waste ended up in rivers, lakes or dumps.  I invited Sonia to participate in a training workshop, where she would learn to value herself and the work she did, to know about social, economic and environmental benefits in regard to her job and that she could develop it in a better and organized way, creating a microenterprise, adding value to waste, creating new products, taking on new challenges and using all the courage she had to build new ways to recycle and have better income and improve her working conditions.

Years after I witnessed Sonia’s growth, while she was dictating a course on recycling to teachers and students at schools, and visiting companies offering her handbags, purses and other products made with recycled paper.  She had become the manager of her microenterprise.   She took part in many working sessions while drafting Law 29419, bill that regulates the recycler’s activity and which was promoted by Ciudad Saludable.  Sonia is no more in this physical world but her colleagues and her son continue her work.

The essence of our work is to provide integrated systems for the management of solid waste, being its core objective to create microenterprises formed by the inhabitants of the area where this service will be given and by waste pickers who are operating informally.  This allows us to modify the attitude of the population and the authorities in regard to waste pickers, reassessing their labor within society; on the other hand,   we show through our work how families with low income can count with high quality services, and demonstrate that we can all change the world if we are willing to.

We made mistakes during this process of course, but we were able to identify the complexity of working and complementing actions and services with the public sector, specifically municipalities.  There exist a series of paradigms and interests which are not easy to change, but not impossible.

We could prove that the proposed technology can be adapted to different circumstances and can easily be managed by the microenterprises; before we started, the collection done by informal waste pickers was a marginal job, today as partners in their microenterprises, they have become environmental promoters, thus contributing to generate a recycling culture and also to generate monthly income for their families, something they had never dreamt of,  they were used to paternalistic policies coming from the Government.

Where are we going to with what we do? We intend that this strategy is assumed as an official policy by the central government and by municipalities.  We also intend that the leaders of these public organizations can understand that this practical experience opens the possibility of socially privatizing public services, offering a better quality and incorporating into the entrepreneurial activity those citizens that are considered marginal by our society.  We also aim at proving and validating similar strategies in other fields of environmental management, allowing the development of abilities in local actors, the same who are victim of the problems but mostly responsible for changing them.

The most important thing for a social entrepreneur is to believe in what he/she does, to be part of the initiative, to be ready to learn and change, to be open to innovate without limits or restrictions due of technical, social, cultural and economic paradigms; contributing to the development of abilities and leadership within the human groups with which they work.