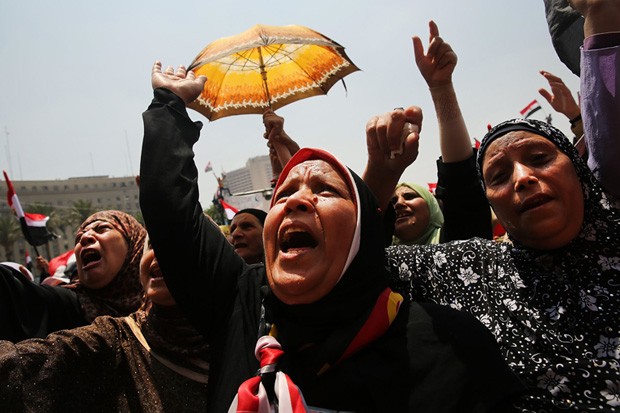 About 100 women have been sexually assaulted in Egypt’s Tahrir Square amid ongoing protests and a potential military coup to remove President Mohammed Morsi from power, Human Rights Watch said Wednesday.

Among them was a Dutch journalist, in an attack that mirrored the 2011 sexual assault in Tahrir Square on CBS’s Lara Logan, after the fall of Egyptian President Hosni Mubarak. Some Egyptian women have reported mob attacks in the last few days, while others say they were raped with a knife or other blade. Despite the severity of the assaults – and of the protests – many women have begun to fight back.

Some have responded by alerting others of the crime. Harassmap, an online resource for Egyptian women to self-report instances of abuse by text, email, call or tweet, shows more than 840 women have reported sexual abuse or harassment in Cairo since last October, and dozens in the last several weeks. In one instance reported June 27, a woman reported three “a**holes” harassed her in a car while she was on a bridge.

Other women have descended on Tahrir Square to try to stop the attacks before they begin. Members of a new group called Tahrir Bodyguard, started by Cairo-based HR executive Soraya Bahgat, who told CNN she was fed up with the attacks and needed to do something, wear yellow vests and helmets and patrol the square to ensure women are not being attacked.

On Wednesday, for example, volunteers of Tahrir Bodyguard – both women and men – plan to gather at Qasr el Dobara Church, the largest evangelical church in Egypt, located just off of Tahrir Square, before wading through the hundreds of both pro- and anti-government protesters gathering in the streets. Similar protection groups have also sprung up online and will be active Wednesday, including “Operation Anti Sexual Harassment” and “I Saw Harassment.”

Sexual assault has been a problem in Egypt long before the recent upheaval. In a 2008 survey by the Egyptian Center for Women’s Rights, 83 percent of Egyptian women and 98 percent of foreign women said they had been sexually harassed in the country.

And the government has done little to help. In 2011, Egypt’s Shura council blamed the sexual abuse on the women for having participated in the protests.

“Women should not mingle with men during protests,” Reda Al-Hefnawy, a Freedom and Justice Party member, told the Egypt Daily News. “How can the Ministry of Interior be tasked with protecting a lady who stands among a group of men?” Read more…