Fundamental Rights in the EU : challenges and achievements in 2013

WAVE network has compiled the results of the EU-wide survey on violence in a 9-page document giving the main data for each EU country.

In the frame of its research project looking at hostility towards children with disabilities across the EU, the European Agency for Fundamental Rights has published new online material explaining key elements of child-friendly justice to children. 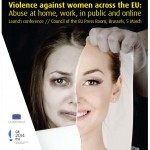 Violence against women across the EU: Abuse at home, work, in public and online – A survey by FRA

Racism, discrimination, intolerance and extremism. A new report by FRA

Crimes motivated by racism, xenophobia and related intolerances, the mainstreaming of elements of extremist ideology in political and public discourse,