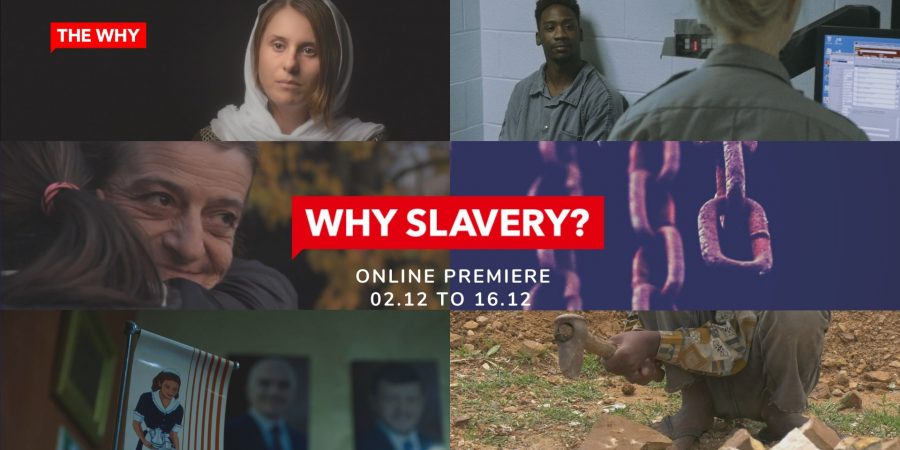 From December 2nd, International Day for the Abolition of Slavery  until December 16th, Time For Equality joins the online global awareness campaign, “WHY SLAVERY?” launched by THE WHY FOUNDATION.

Over two weeks, 6 award-winning documentary films will be screened live, some followed by Q&A sessions with the directors. Read below for more info and the full programme.

On 2 December 1949, the United Nations General Assembly adopted the Convention for the Suppression of the Traffic in Persons and of the Exploitation of the Prostitution of Others (317 IV). Since this adoption, over half a century has passed, yet ‘slavery’ did not end per se. Even though some forms of slavery have changed throughout history, ‘slavery’ in fact exists today in the form of ‘modern slavery’. According to the International Labour Organisation (ILO), although it is not defined by law , ‘modern slavery’ refers to “situations of exploitation that a person cannot refuse or leave because of threats, violence, coercion, deception and/or abuse of power” and takes various forms, such as forced marriage, human trafficking, forced labour exploitation, forced sexual exploitation and so on. The ILO estimates that, as of 2016, over 40.3 million people were considered as ‘victims of modern slavery’, among them about 25 million were in forced labour and 15 million in forced marriage. Of these, 10 million people, or 25% of the total, were children below the age of 18 years, and 28.7 million people, or 71% of the total, were women and girls. ILO’s global estimates of child labour reveal that about 152 million children, aged between 5 and 17, were subject to child labour.

While some might think that ‘modern slavery’ occurs only in the so-called ‘developing countries’, modern slavery is actually prevalent in every region of the world, including Luxembourg where Time For Equality has its base. A report on human trafficking published by the Commission Consultative des Droits de l’Homme (CCDH) reveals that, between 2017 and 2018 in Luxembourg, 31 people were identified or presumed as ‘victims of human trafficking’, including two minors. According to interviews with two representatives of services assisting victims of trafficking in Luxembourg (Femmes en Détresse ASBL and Fondation Maison de la Porte Ouverte), it seems that modern slavery occurs especially in the restaurant sector, the construction sector and within private households. Moreover, they add that whereas movies often depict victims of human trafficking as physically imprisoned, in reality, they rather suffer from a “psychological confinement” in undignified living conditions.

In the time of COVID-19, there is a number of factors that might increase the vulnerability of such people and thereby the risks of enslavement. Some factors include the increase in demand for vulnerable personnel with a precarious contract with little or no social protection, in order to meet a sudden decrease or increase in demand (for example, decrease in demand for textile products put workers in the garment industry at a risk of losing their job; and increase in demand for sanitary products turned to prison labour for a means of production); the decrease in the number of available employment opportunities which might push unemployed people towards a risky and exploitative labour market, and the list continues…

On the occasion of the International Day for the Abolition of Slavery, join the WHY SLAVERY campaign with us!

THE WHY FOUNDATION is a Denmark-based charitable organization funded in 2004 by Mette Hoffmann Meyer and Nick Fraser. THE WHY produces informative and investigative documentaries with the purpose of encouraging global critical debate on pressing human rights and environmental issues. It has distributed its works to over 200 countries and territories so far.

Among various focuses, WHY SLAVERY? is one of THE WHY’s projects. 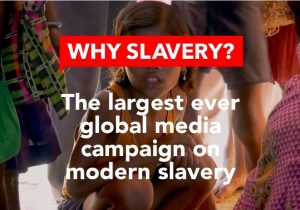 WHY SLAVERY sheds light on stories of men, women and children living in the shadows of modern slavery to increase awareness about human trafficking and modern slavery.

On the occasion of The International Day for Abolition of Slavery, THE WHY launches the largest-ever media campaign on modern slavery. From the 2nd to the 16th of December, 6 documentary films will be screened live, some followed by Q&A sessions with the directors.

Fill in the form to watch the film in the language of your choice and you will automatically receive the link. After the live screening, each documentary will be available online for 48h.

Can an employment system hide a reality of torture and humiliation?

Mary is just one of the thousands of domestic helpers in Jordan. Following an incident at her employer’s house, Mary arrives back to Kenya with burns covering 70 per cent of her body, she succumbs to the injuries. This story offers a glimpse into the reality of harassment, abuse which migrant workers across the Middle East face…

How does North Korea sell their own people to fund its dangerous regime?

Notoriously cash-strapped, the government is selling its own people as bonded labour, or slaves, to work in Russia, China, and a dozen other countries around the world – including member states of the European Union.  While in North Korea, they are lured with a promise of high wages and glory for their families.

FILM: Selling Children (2018) with Q&A with the director, Pankaj Johar

Is poverty raising a generation of children for sale?

In the world’s largest democracy, millions of children are still bought and sold. Throughout Indian society the mechanisms of bonded slave labor are insidious, powerful and nearly impossible to escape. How does the lack of education and poverty provide a breeding ground for modern slavery?

FILM: I Was a Yazidi Slave

Can there be justice after genocide, sexual violence and slavery?

In August 2014, an Islamic State invaded the Yazidi people in Sinjar, northern Iraq. Young Yazidi women were separated from the old and taken to the Galaxy Cinema in Mosul. There, they were tortured and raped.  The film tells a story of Shirin and Lewiza, two Yazidi women captured by the IS who escape to Germany.

Can freedom be more frightening than enslavement?

A European woman has been kept by a family as a domestic slave for 10 years. Marish has been exploited and abused by a woman for whom she toils as a housekeeper, seven days a week in exchange only for meals, cigarettes and a couch to sleep on. Drawing courage from the filmmaker’s presence, she decides to escape…

How do prisons profit from crime?

In the last 30 years, America’s prison population has surged from 330,000 to 2.3 million inmates. In this deeply personal film, director Roger Ross Williams sets out on a journey to understand the complex forces of racism and greed currently at work in America’s prison system.