Watch the trailer
Free. Please register here:  https://www.eventbrite.com/e/the-harvest-film-viewing-and-live-talk-with-the-director-2011-tickets-129990235293
1. to watch the film online (on 19 and 20 November)
2. participate in the live discussion with the director on 20 November at 18:00.
The event is proposed by Time For Equality in collaboration with SMK Videofactory and Open DDB. 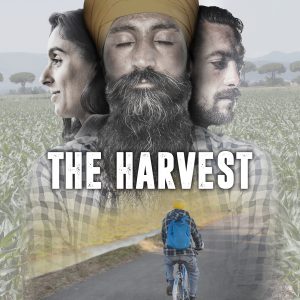 The Harvest is a documentary-musical film directed by Andrea Paco Mariani, which replicates exploitative working conditions of migrant workers from Punjab, India, in the agri-food farms in the Latina province. The film not only depicts precarious lives of Punjabis but also includes real voices of workers and activists recounting the harsh reality, which can be characterized as a form of modern slavery.

The film also includes Punjabi style dance and colorful and bright traditional dresses, nevertheless, this does not give any comical or joyful impression. Rather, it illustrates their pain and repressed agency.

One of the main interesting points in the film is the contrast between the two main characters: Gurwinder, a farm laborer born in Punjab and moved to the Latina province and Hardeep born in Italy and a daughter of a Punjabi migrant. The film describes and intertwines two different stories of a day. The day of Gurwinder replicates the inhumane environment surrounding him. Although Gurwinder barely speaks any words, his eyes, face, looks and motions express his suffering and emotions. On the other hand, the day of Hardeep reports her efforts and struggles as a cultural mediator for the Sikh community, teaching migrants Italian language and lessons to empower them to resist.

Another touching point is indignant (one-way) interactions between employers and workers. Employers’ behaviors towards workers are nothing but inhumane, insulting and barbaric. They barely call workers by their names but by systematic labels such as ‘team 1’, ‘team 2’ etc., treat workers as if they were machinery, make fun of their appearance and culture and look down on them. Workers are racialized, dehumanized and facing a modern form of slavery.