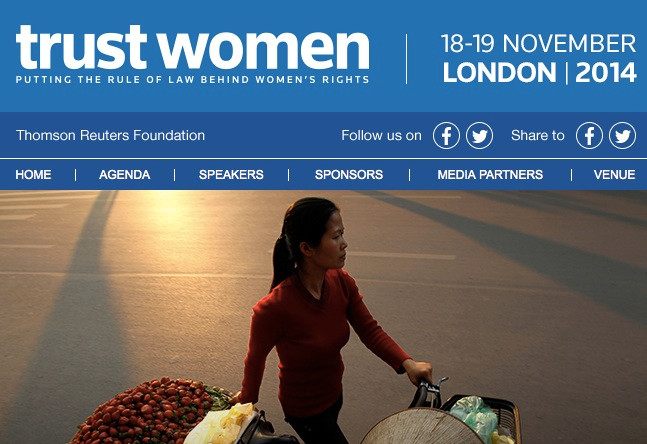 Time for Equality took part in the Trust Women Conference held in London on 18-19 November 2014 to find innovative solutions to boost women’s  empowerment and to fight human trafficking and slavery.

Rosa Brignone, Time For Equality’s founder and president, attended the event along with 550 delegates from 55 countries, representing 260 international organizations: “The added value of this conference, which brings together every year leaders, corporations, NGOs, lawyers and activists in the field of women’s and human rights, is the strong link between discussions and commitement to action.”

“My main take away from this event is that it’s time for action, here and now, with the resources and the means that you have. There is no time to lose in waiting for the “right” moment or the ideal situation. A list of concrete actions has been announced already at the end of the Conference, and will be regularly updated and followed upon. As for Time For Equality, we will focus on fighting human trafficking and child slavery. As a first step, we will be actively supporting the global campaign to end child slavery” – said Rosa.

This year the main themes that were discussed during the 2-day conference, led by Monique Villa, CEO Thompson Reuters Foundation, referred on one level to women, including women and finance, women and cities, women and land rights, and on the other hand addressed issues related to human trafficking and slavery. It dealt with slavery in the supply chain, presented real stories of people surviving human trafficking and slavery and examined the psychology of survivors.

Among the many different commitments, Trust Women delegates took strong action to fight human trafficking and slavery in the supply chain; to facilitate women’s access to land and finance, and to boost opportunities for women living in mega-cities.

Urban planning and the different public transportation needs for women based on travel behavior, affordability and safety were discussed by worldwide experts at the London conference.

Data revealing the Top16 most dangerous transport system for women was made available by Thompson Reuters Foundation. From Bogota, which ranks first to London, New York or Tokyo, as the three least dangerous cities for women to use public transport, women are exposed to a large number of  gender-based inequalities.

Land rights remains mostly under-covered by the media, and one that is often difficult to grasp for those who are not experts in the field. At the 2014 Trust Women Conference, speakers assessed the current situation, looking at the many challenges out there from a number of different perspectives, including the role that big corporations can play to foster more justice in the area of land rights.

This new infographic is the first to document the wide range of benefits that flow from women’s land tenure security. It points out that women’s secure tenure can help the world reach a number of the most critical sustainable development goals – from improved nutrition, education, and resiliency, to reduced domestic violence. In an article signed by Chris Arsenault for Thomson Reuters Foundation, the writer points out that women are still battling to secure their land rights and that of 143 countries surveyed by the World Bank earlier this year, 37 still have discriminatory land laws in place. Read more on the topic here.

Micro-finance and entrepreneurhship were proposed as effective solutions for women to earn money and receive a constant income. Working with start-ups that are relevant to women and really honing in on the sectors where women are more engaged, whether it is agriculture, livestock, or other sectors, are set to empower women economically all across the world.

Roshaneh Zafar from the Kashf Foundation  explains here how women in Pakistan have benefitted from micro-finance and entrepreneurship and created a ripple-effect in changing attitudes towards women’s involvement in the economy.

Below are two much-shared quotes by Muhammad Yunus, Nobel Peace Prize Winner and founder of Grameen Bank, from his keynote speech on Day 2 of the Conference,  on women creating their own job and empowering future generations:

When she says ‘I don’t want money’ – always remember it’s not her voice, it’s the voice of history, with layers of fear.”

People asked me ‘why a bank for women?’ But had they ever asked another bank ‘why men?’”

With an estimated 21 million slaves of which 5.5 million are children, there are more slaves in the world today than at any other point in human history. Slave labour generates $150 billion a year and is part of the modern supply chain.

Twenty years ago, when global corporations began outsourcing the production of their goods, most of them lost control of their supply chains. Supply chains have become increasingly long and complex, and companies are often outsourcing responsibility to third party certification schemes that often don’t guarantee much at all. So, how can we make sure that companies don’t sell us products made by slave labour?

These are some of the quotes that were heard on Day 2 of the Conference in relation to today’s slavery.

“Enslavement is beauty trapped in shame. Slavery is shameful for all.” – Anish Kapoor, Artist

“We as Western shoppers are responsible for the lives of women living across the other side of the world” – Livia Firth, Creative Director, Eco-Age and Founder of the Green Carpet Challenge

“Can data come to the rescue? Yes. Slavers are leaving a digital footprint in everything they do.” – Monique Villa, CEO, Thomson Reuters Foundation

“At this stage in history we have the largest number of slaves in the world.” – Kailash Satyarthi, 2014 Nobel Laureate for Peace and Chairperson of Global March Against Child Labour

“The internet can be described as a twenty-first century crime scene. And if we want to stop modern day slavery, we need to use modern day tools.” – Christopher White, Program Manager, U.S. Defense Advanced Research Projects Agency

“We have … to build a civil rights movement against slavery,” Kailash Satyarthi, 2014 Nobel Laureate for Peace and Chairperson of Global March Against Child Labour

“Denial of childhood and denial of freedom are the biggest sins which humankind has been committing and perpetuating for ages.” Kailash Satyarthi, 2014 Nobel Laureate for Peace and Chairperson of Global March Against Child Labour.

You can find more information on 2014 conference as well as the previous editions here.