In a compelling, heartfelt piece in First Post, one of India’s most widely read online portals, North-Eastern writer Makepeace Sitlhou made a point about the Indian media’s response to Nido Taniam’s death. Nido Tainam, a youth from the North-Eastern state of Arunachal Pradesh was the son of Nido Pavitra, a Congress politician. “The personal becomes political all too soon for a person of a minority community,” Sitlhou wrote, “especially one who comes from a socio-politically disadvantaged and marginalized community that is routinely subjected to ridicule, stereotyping, suspicion and various forms of violence.” She goes on to passionately describe why racism, particularly against people from the North East, continues to be viewed very differently in India. Nido’s death, she suggested, above everything, could be a case of “harmless stereotypes gone bad”.

But, there is a point that most writers seem to miss about the spate of racist and ethnic attacks on minorities in India  – most of these attacks stem from common stereotypes and racial profiles that Indians have learned and observed over the years.

In India, the impact of colonisation is still a living history, which makes the colonial argument relevant for an Indian citizen witnessing any kind of violence against people who are ethnically different. Colonial discourse, still visible in English education in India at large, played a central role in shaping an average citizen’s thinking for decades after independence. Yet, even today, the Indian state continues to focus on a narrow approach to sharing knowledge by avoiding discussions and debate on India’s colonial past, discouraging positive curiosity about neighbouring countries and playing on stereotypes that perpetuate a divisive mindset.

Writer Thangkanlal Ngathe points this out in an essay about institutional racism in India, published in the Economic and Political Weekly.

“Most people have, through their own localised socialisation process, internalised some levels of prejudice against people who are not like them. The problem assumes an altogether different dimension when the institutions of law-governed societies themselves become a site of racism. One needs to seriously worry when institutions like the police, which are supposed to be neutral and fair to everyone, can no longer be trusted to enforce the law in a fair and just manner.” 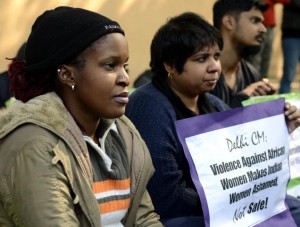 African nationals and others protest against ‘racist’remarks made by Delhi Law Minister Somnath Bharti and other AAP members, in New Delhi. Photo: The Hindu

The reality that many of us in India are witnessing a wave of relentless, passionate nationalism that focuses on the progress of one religious community over another. With the general elections around the corner, there are more instances of racism surfacing in Indian cities. In January, Delhi minister for Law, Somnath Bharti, accompanied by male supporters of the Aam Aadmi Party (AAP) conducted an illegal raid and shamelessly harassed young Ugandan women claiming that they were a part of a drug and prostitution racket.

Needless to say, this wasn’t the first time that African nationals in India were threatened and held accountable for crimes they did not commit. Shefali Syed, a Ugandan of Indian descent was quoted saying “Indians work on a caste system, if we look down on each other, then why would we have an attitude of equality towards outsiders? Furthermore, Indians were taught by the British that the Africans were beneath them, we were the superior colony.”

Of course, stereotypes can be positive as well. This is a point that many will argue. But what if we internalise stereotypes without questioning them? Simply put, the damage that can cause is unthinkable.

Meera Vijayann is a writer and blogger who focuses on gender rights and social issues in India. Her writing has been published by The Guardian, CNN, Open Democracy and Forbes among other publications.