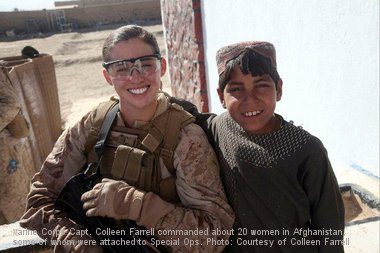 Women are bound for perhaps thousands of combat roles amid a mandated, military-wide integration, but the armed forces’ most coveted jobs — including Navy SEALS and Army Rangers — could remain segregated, male-only preserves largely due to concerns about sex, according to former special operations troops.

Some ex-military members contend sexual attractions and relations are inevitable if male and female Special Ops members are placed in self-contained groups (as small as 12 or two) for long periods in lonely places. Those encounters, they add, could spark competition, jealousy and general havoc within tight teams where mutual trust and a laser attention to detail keep those troops alive.

Brandon Webb, a former Navy SEAL who deployed to Iraq and Afghanistan, contends that potentially disruptive hookups will occur if women are assigned to what are now all-male Special Ops teams: “How do you practically expect men and women not to have sex together under extreme stress, a half a world away from America — and how does that affect unit effectiveness?”

While the major branches each have submitted precise plans to test, train and assign some women to combat by 2016, leaders of U.S. Special Operations Command won’t yet commit to opening their 15,497 jobs to females. They cite a certain disquiet — from the top of that exclusive service to the guys on the ground — about “culture” and “behavior” pitfalls potentially linked to integration.

“We haven’t made any decisions, whatsoever … There’s concerns (among the rank-and-file). And we all share those concerns,” said Maj. Gen. Bennet Sacolick, director of force management and development for Special Ops, which has commissioned the RAND Corp. to survey its men about the social ripples of placing women in those jobs.

In a dangerous scenario, the integration of women into smaller SEAL or Ranger teams could devolve into unhealthy distractions between young men and young women, predict some ex-Special Ops members.

“It can shift the focus of doing the job if everybody’s trying to get laid. I know it sounds incredibly juvenile, but it’s incredibly true,” said Jack Murphy, a former Airborne Ranger and Special Forces sergeant in Iraq and Afghanistan.

“Throwing a woman in the middle of a team like that is just going to make the entire team useless because, in the end, there will be so much infighting, so much drama,” added Murphy, who now authors military thrillers, including “Reflexive Fire.”

‘There for the mission’

Yet a small number of women already have been attached to Special Operations teams in Afghanistan, and their former commander — a female— doesn’t foresee women allowing any consensual antics if, eventually, they are officially assigned to those ultra-professional teams.

“As a female Marine, for example, you have to be more than professional because you’re going into that situation where there’s already public opinion against how you behave and how you will perform,” said Colleen Farrell, a captain in the U.S. Marine Corps Reserves who served in Afghanistan during 2010 and 2011. As a platoon commander there, she oversaw about 20 female troops attached to infantry and Special Operations units.

“The female Marines I worked with were the most professional Marines I ever led in my career. When you have elite teams where the level of discipline is just so high, I really don’t think that’s going to be a problem,” Farrell said. “Those Special Operations soldiers and Marines who are over there, they are there for the mission. They’re not in Afghanistan to get married.”

Talk of potential “cultural disruption” due to integration, Farrell added, was used twice in the past by some U.S. military leaders: before the repeal of “Don’t Ask Don’t Tell” — the policy that kept gays from openly serving in the armed forces — and before the branches were racially integrated.

“And we’ve seen that both of those (concerns) have been disproven,” Farrell said.

Still, the open hesitation among Special Ops leaders and the planned survey of current Special Ops troops has caused some women-in-combat proponents to question whether females will get an honest shot to crack the SEALs or the Army’s Green Berets.

“Words like ‘cultural factors’ always seem to be code for: ‘We don’t want women there,'” said Anne Coughlin, a University of Virginia law professor who helped inspire a 2012 lawsuit filed by two female service members against then-Secretary of Defense Leon Panetta, opposing the combat ban for women.

“This idea of unit cohesion — it simply rests on stereotypes. There’s nothing left to study. Bring them on. Let’s train them up. They’re going to be able to do the job,” she added. “There are women out there who are qualified to do these jobs, who want to put their lives on the line in the service of the country. The country needs to let them try.”

Amid the ramp-up for integration, each service is reviewing its fitness requirements for every job although, according to Army Lt. Gen. Howard Bromberg: “We’re not changing standards.”

That is one physical issue that doesn’t worry Webb, the former Navy SEAL.

“The biggest argument (against women in combat) that I hear is: Men are stronger than women. Yeah? So what? The Special Ops community has always been about mental toughness,” said Webb, who authored a book on his war experiences, “The Red Circle: My Life in the Navy SEAL Sniper Corps and How I Trained America’s Deadliest Marksmen.”

To perhaps balance the gender mix while reducing the potential for inappropriate liaisons, Webb said he favors the idea of all-female units, such as sniper teams. He cited the example of Soviet sniper Lyudmila Pavlichenko, who recorded 309 kills, mostly German soldiers.

“The Special Operations community is rooted in unconventional warfare. We’re forgetting that,” Webb said. “Let’s shake off this conventional BS thinking of ‘men only.’ We need the element of surprise — putting women in these crazy roles to combat the enemy.” Read more…