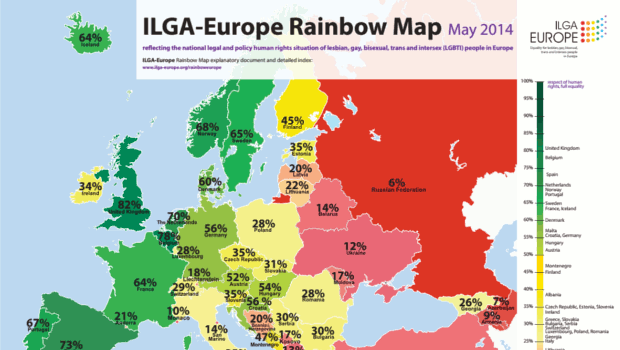 ILGA Europe  has just released the latest edition of its Rainbow Europe package, which shows that while the human rights of LGBTI people have undoubtedly gained great visibility across Europe, progress in terms of real legal, political and social changes vary considerably from one country to another.

The package is composed of the Rainbow Europe Map 2014, which reflects the 49 European countries’ legislation and policies that have a direct impact on the enjoyment of human rights by LGBTI people, and of the Annual Review of the Human Rights Situation of LGBTI People in Europe 2014, which provides an analysis of trends and an overview of key political and social developments country-by-country.

The Rainbow Europe Map 2014 shows that the European average on the measure of legal protection is still very low – only 36%. The average for EU countries (46%) does not even reach the half-way mark. This said, the gaps between European countries remains enormous and ranges between the top score of 82% (UK) and the bottom score of 6% (Russia). Most worryingly, 34 out of 49 European countries (including 14 EU Member States) are below 50% mark. 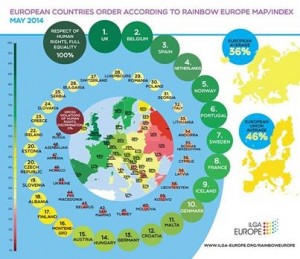