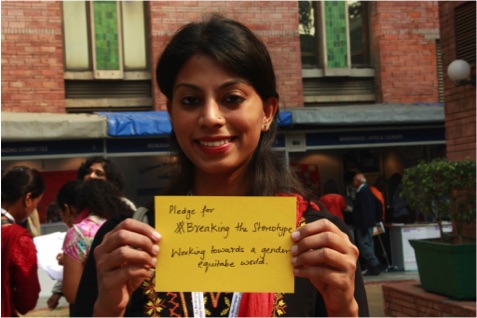 In November 2014, I presented a talk at the National Assembly for Wales on the importance of digital media and the role it plays in the women’s rights movement in India. In the talk, I touched upon key issues that women across the world face in expressing their views online.

Most women in the public sphere, despite having the ability to access platforms to express their views, find it difficult to do so without facing bullying, threats to life, severe harassment and violent backlash and so on and so forth. A lot of comments I received because of my work were vile, hateful and even misogynist – and no, they weren’t only from male readers or viewers but also from women. And the pattern in these comments were telling about the highly reactive audience on the Internet. It became clear to me in that initial period that the personal cost of participating in the system were incredibly high.

A recent Pew survey found that 25% young women are victims of some form of harassment online. The study also cited the harshest forms of abuse such as physical threats, stalking and sexual harassment, mostly reserved for women. By showcasing the role that digital media played in building movements, discussing major controversies such as #CelebGate and #GamerGate and #WomenAgainstFeminism, I wanted to show young women in Wales what was possible if they spoke up against sexual violence. This year, I hope to encourage more women across the world to use their skills to support the movement to end gender-based violence.

Meera Vijayann is a writer and blogger who focuses on gender rights and social issues in India. Her writing has been published by The Guardian, CNN, Open Democracy and Forbes among other publications. Follow her on @meeravijayann

Voices of men: Why is it missing from the gender rights movement?

The Role of Men in Gender Equality